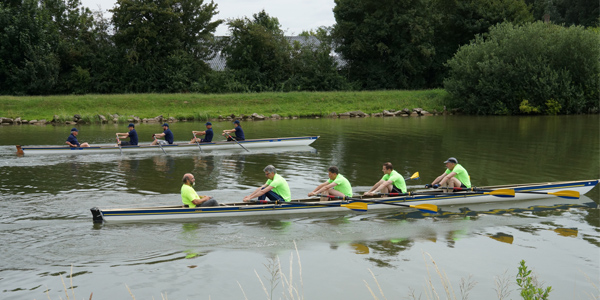 In business, working together implies staying on the right track as a team and following the same line. Some of the Vivenics staff took things quite literally last week when preparing for a rowing competition on a canal near the Dutch village of Oss. Remarkably enough, a few days earlier, Petrik Cuijpers had been spotted in Cambridge of all places. Was he taking things a little too seriously?

Visiting the city that is known for its University and boat races with students at Oxford, turned out to be a coincidence as Petrik explains. “I happened to be in Cambridge at the time to attend a user group meeting at Dotmatics, our brand-new IT partner. Nonetheless, we have made a great effort to prepare for the finals on Sunday 24 June. As this was our first rowing experience, we followed a total of eight training sessions varying from a simulation ashore to actually rowing on the water. We chose to compete in the ‘double four with coxswain’ in a 12 metre boat. Rowing requires a lot of specific skills, both individual and as a group. To make things even more difficult, the boats are far from steady so if one of us misses a stroke, we all risk slowing down or even going overboard.”

“We even won the bronze medal which, admittedly, isn’t that much of an achievement with only four competing boats. Then again, the race was organised by and for regional companies. Obviously, combining physical exercise with networking opportunities was a lot more important than actually crossing the line first. Our most tangible reward was a relaxing and very tasty Italian buffet afterwards. This was a nice opportunity to chat about joint projects and other business matters in a friendly and less formal way. On top of that, we took the opportunity to improve the way we work together as a team. It doesn’t take much imagination to see the similarities between depending on each other while rowing and working towards the same goals as a business.”