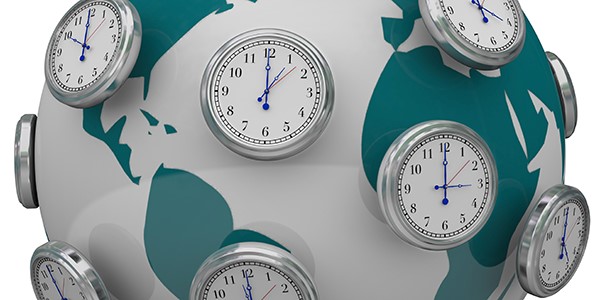 Time is an abstract concept that we have made tangible by dividing it into units of time. Twice a year, we further manipulate time with summer and winter time. Internationally this is a recurring hassle, just like a worldwide division into time zones. One standard world time can easily prevent such coordination problems. Give it a little ‘time’ and we will all get used to it.

This Sunday we will all set our clocks one hour earlier. As Americans follow a week later, we will have to pay extra attention when scheduling and participating in meetings during the days in between. Without summer and winter time, things would be a lot easier and at the same time it would liberate many of us from that nasty jet lag feeling that can last for days. On a side note, if there was any moment in history when a misunderstanding about time could have ended in a tragedy, it was in 1944 in the Dutch city of Kerkrade. Both the Germans and the Allied Forces had agreed on a three-hour ceasefire to evacuate wounded people.

Not dramatic, but disturbing

Due to a very unfortunate confusion about the actual start of winter time the bullets already started flying again after two hours. The blunder ended with only two slightly injured. Fortunately things that you and I have to deal with are a lot less dramatic, but can be annoying nonetheless. For example, one of my business associates had recently changed a shared document in Teams at 00.02 hours. Take it from me that that person wasn’t even awake at midnight, so the server he had been working on was set at a different time. This kind of confusion becomes downright disruptive when important deadlines are involved.

Or when the exact time of registration of data is crucial, such as in life science and in international investigation cases. In short: it is time for the next paradigm shift. Moreover, the establishment of a single uniform world time fits in seamlessly with these times of globalization. It will no doubt take some time to get used to getting up at, say, 2 pm instead of 7 am, or having lunch at 8 pm. Then again, the introduction of the euro was also considered a bridge too far by many of us. After a while of counting backwards and forwards, and actually sooner than anticipated we accepted that new situation too. In other words, we should not underestimate our own resilience.

By the way, I once studied astronomy and in astronomy it is common practice to report celestial phenomena all over the world in standard universal time (UTC). During that study I also learned that noon was determined locally by the altitude of the sun for centuries so even in The Netherlands two centuries ago noon in Amsterdam was a few minutes later then in Arnhem. Due to tampering with time zones that were somewhat randomly chosen, the sun is now at its highest point more than an hour and a half later during summertime anyway. So why not fool ourselves once more to deal with all those misunderstandings once and for all? As far as I’m concerned, it’s already two minutes to midnight. Or two minutes to ten, or two minutes to six or….