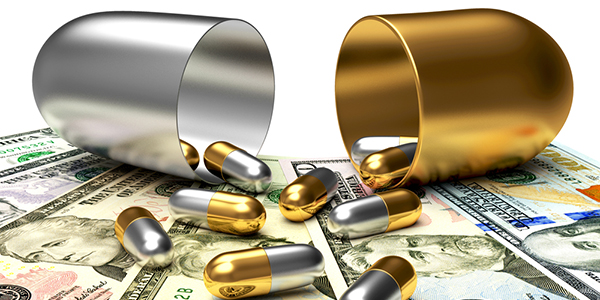 Falling ill is no picnic. Fortunately, the cure is often just a few blocks away in the form of some pill, ointment or powder. Rather unfortunately however, the prices for many drugs are so high they can instantly cause some other condition than the one you came to the drug store for. With a background in pharmaceutical R&D, we already had a pretty good idea why drugs are generally expensive. Being inquisitive by nature we decided to immerse ourselves in the subject and came up with some staggering results.

First of all, data integrity, which is so closely associated with the pharmaceutical industry, is taken a lot less seriously by some people when it comes to estimating the cost of developing drugs. Estimates range from an average of around $600 million for one effective and registered drug to even several billions! What figures are held to be true seems to depend on political beliefs and methods of cost allocation. Basically, R&D starts with selecting an extensive set of potential active (chemical or biological) substances, or ‘candidates’, to be used in a drug. Even though this stage may take several years, including considerations such as effectiveness, stability, scalability and shelf life, the costs here are negligible.

Even the subsequent safety or toxicological studies, which involve in vivo studies to determine a safe dosage, and the (pre-)clinical stage with small-scale research on test subjects is relatively cheap. It is during the following clinical trials that costs start soaring. After all, it takes large-scale statistical research among many thousands of people to prove the effectiveness of the drug, either against a placebo or a comparable drug that is already available. With tens of millions per trial, expenditure at this stage can even add up to $1 billion. On top of that, there are research costs for drugs that don’t make it to the shelves that need to be accounted for.

According to recent research among one hundred pharmaceutical companies, covering the last ten years of operation, the average cost for developing one single successful drug amounts to a mind-blowing $5.8 billion! With production costs being marginal, drug manufacturers only have a few years left to fully exploit their patent after registration of the drug with the authorities. With ever stricter government regulations, this amount is more likely to rise than go down. Once a patent expires, generic manufacturers will usually claim a piece of the pie offering a more affordable alternative. If you allow us, we will discuss that in a future blog. Until then, stay healthy. After all, prevention is always better than cure.